Here is a list of the most important stink bug facts you should be aware about.

What do Stink Bugs Eat? 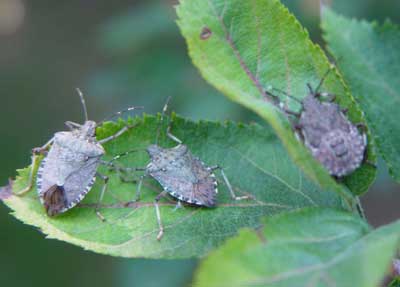 Stink bugs are basically herbivorous. They have sucking and piercing mouthparts, which they use while feeding on a number of fruits and crops. They suck juice from fruits and cause significant damage to the plants. Their major hosts are birch, serviceberry, catalpa, butterfly bush, pecan, redbud, hackberry, pepper, dogwood, citrus, cucumber, tomato, sunflower, apple, pear, plum, and grape. They render damage to the plants in multiple ways: create necrotic areas on the surface of fruits, injure seeds, or even transfer plant-pathogens.

Some Asian stink bugs also hunt beetle larvae or caterpillars thus curbing devastative pests and proving beneficial for the plants. This is all about their eating habits in summer season; since they do not generate their heat on their own, they have to rely on external surroundings to keep themselves warm. Therefore, they remain hibernate in cold seasons.

Normally they do not. It is a fact that stink bugs feed on fruits and vegetables and they hold no grudge against humans. However, they do bite humans when they feel threatened and do this to prevent any sort of danger to their lives. As a result of their bite a person may feel painful, but harmless, swelling or rashes on the affected part of the body. Even though stink bugs' bite is usually treated as non-poisonous bite for humans but it may prove poisonous for small kids and pets.

Sink bugs are not poisonous for human beings. Some people erroneously relate their pungent smelling liquid with that of poison. It should be noted at this point that they emit foul smelling liquid only to deter predators and discourage molestation. It will also be an interesting fact that in some African countries like Botswana, Mozambique, Zimbabwe, Venda, Zambia and South Africa, people tend to eat stink bugs while considering it a part of their culture.

Food and environment both have attractions for stink bugs. They are mostly attracted by juicy plants, which they suck through their sucking mouthparts. These plants include pepper, citrus, cucumber, tomato, sunflower, apple, pear, plum, and grape.

As for environment, they breed in warm weathers because they are cold-blooded and need external heat to keep them alive. It has been noticed that they are also attracted towards light colored houses or places where they find clear sun exposure. Inside houses, their most favorite places are windowsills and door frames owing to the availability of suitable temperature.

Yes, stink bugs do fly. Although during their nymph stages, they do not have wings and therefore only climb from one plant to another; however, they are ready to fly as soon as they get full-fledged wings. Since they remain inactive during winter season, they rarely fly when the temperature is not sufficient to provide them with enough heat. But again some species of stink bugs like brown marmorated stink bugs fly to warmer locations leaving their birth areas.

Definitely, they stink highly offensive and abhorrent smell when molested or crushed. Stink bugs embark upon stinking as a defensive act to prevent any threat to their lives. Moreover, this stink also serves the purpose of inviting other stink bugs to relatively warm and lightened areas.